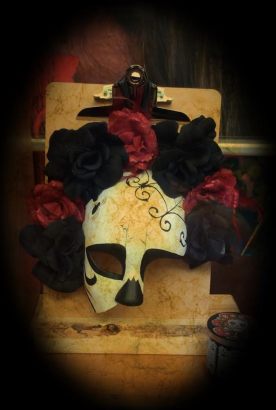 Halloween and Day of the Dead…  Once a year each person chooses to celebrate depending on their customs, culture and also where they live.

For me personally, I’ve always celebrated Day of the Dead, however, the costume parties appear to be so much fun!  Each person can express themselves in different ways and adopt their own disguise.  Each person becomes a different character which expresses part of their personality or identity.  Some pick their costumes to joke around or some try to by scary, but no matter which celebration you choose to take part in, one thing that is always present are skeletons! In its own way skeletons have also been converted into a part of the fashion world ever since 2004.

Alexander McQueen is referred to as the leader or expert in incorporating skulls into fashion.

About a decade ago, this English designer introduced to the world his collection of scarves with skulls that quickly converted into a trend and also part of the image of his brand.  He kept with the theme and continued to put skulls in his fashion designs.  Each piece of clothing or accessory that he produces contains this symbol.  Following this, many other brands and designers began to follow in his footsteps, making this trend more economically accessible and popular.

Now a days, just about everyone has at least one item of clothing or accessory that contains this small detail in our closets.  Thanks to Alexander McQueen, skulls and craniums have become part of our everyday wear so we can celebrate the Day of the Dead everyday of the year, but especially this month!  Happy Halloween!